Recurrent neural network: Why not a standard networks?

There are problems when handling text: 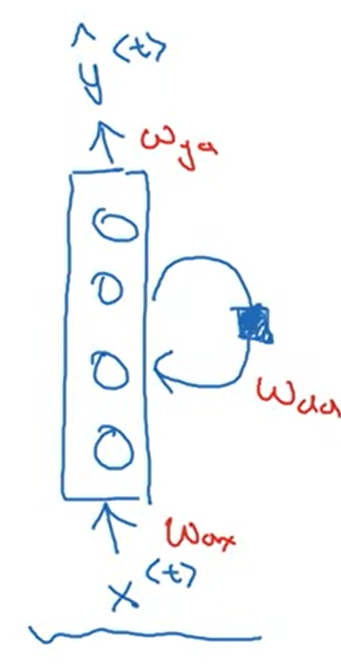 It only uses the info that is earlier in the sequence to make a prediction .

- Superscript $[l]$ denotes an object associated with the $l^{th}$ layer.

- Superscript $(i)$ denotes an object associated with the $i^{th}$ example.

Situations when this RNN will perform better

- This will work well enough for some applications, but it suffers from vanishing gradients.

- The RNN works best when each output $\hat{y}^{\langle t \rangle}$ can be estimated using “local” context.

- “Local” context refers to information that is close to the prediction’s time step $t$.

What you should remember:

* The recurrent neural network, or RNN, is essentially the repeated use of a single cell.

* A basic RNN reads inputs one at a time, and remembers information through the hidden layer activations (hidden states) that are passed from one time step to the next.

* Each cell takes two inputs at each time step:

* The hidden state from the previous cell

* Each cell has two outputs at each time step:

Input and output may have different length, or even types.

One to one: generic neural network

One to many: music generation

Many to one: sentence classification 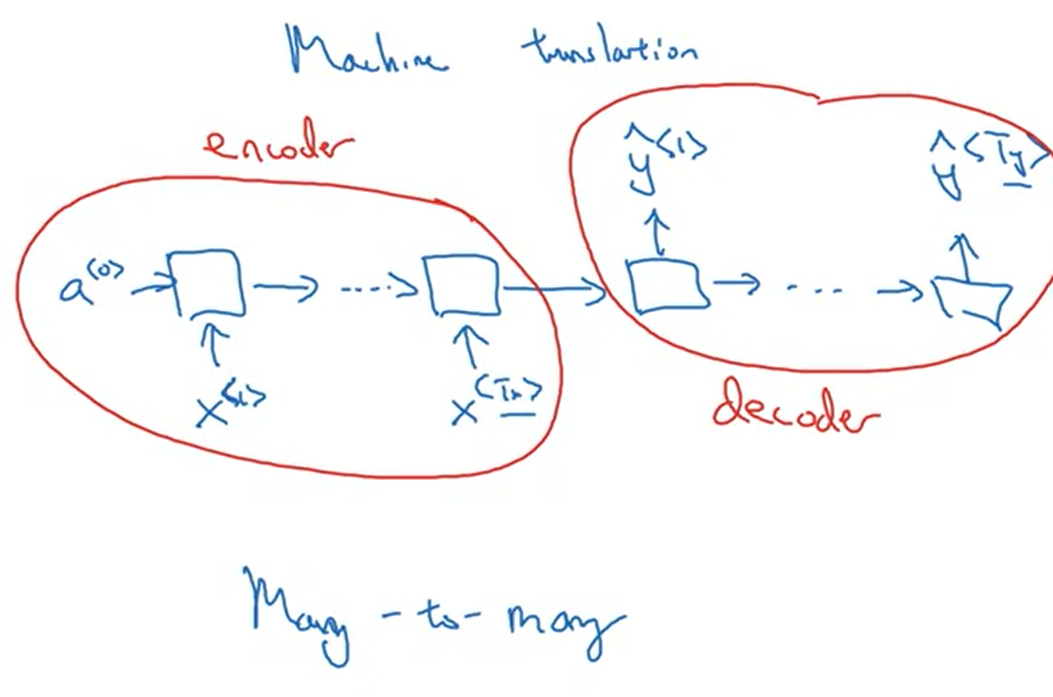 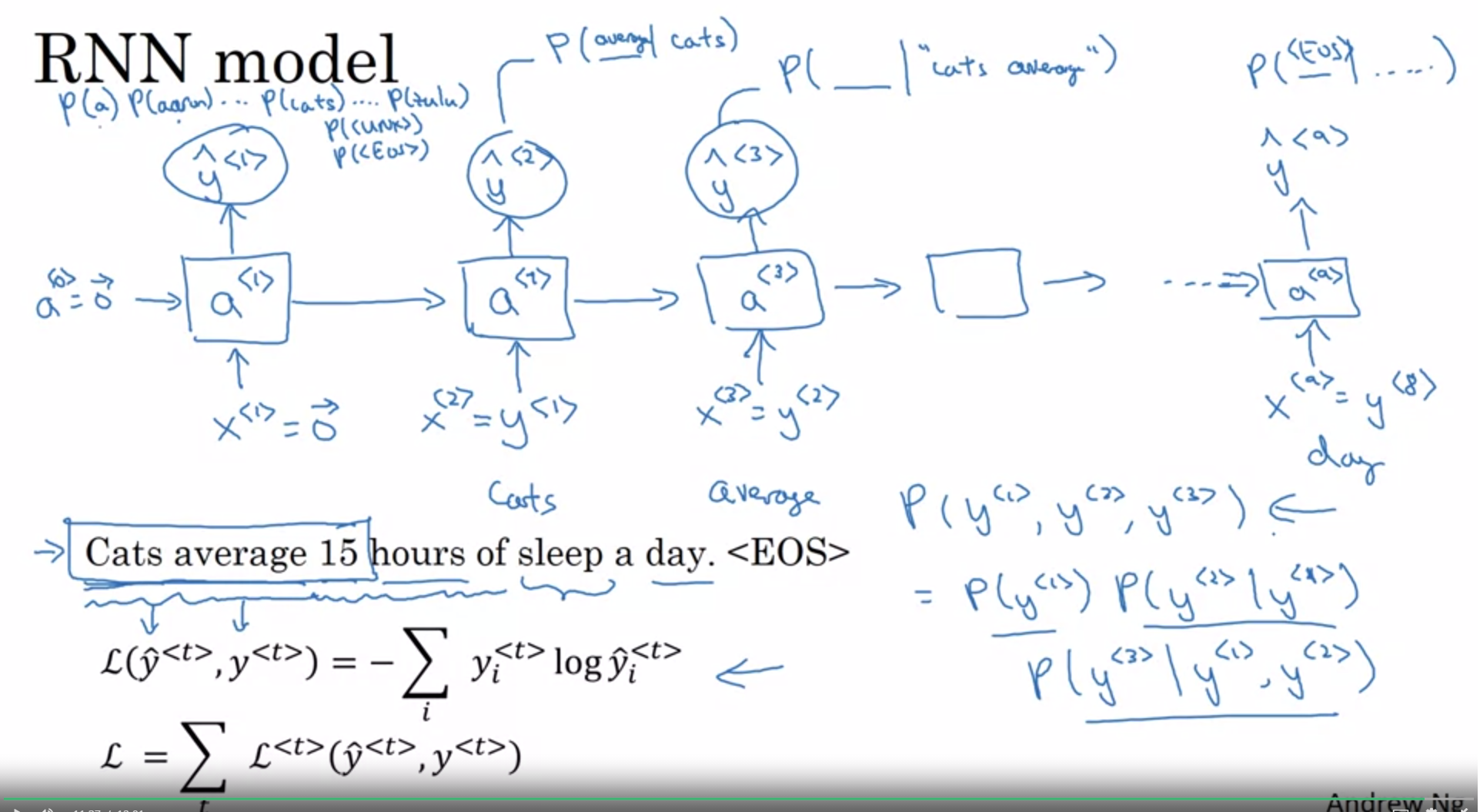 Don’t ever have to worry about unknown word tokens. It is more computationally expensive

Vanishing gradient with RNNs: long term dependencies It’s just very difficult for the error to backpropagate all the way to the beginning of the sequence

LSTM means long short term memory. It is constructed by gate recurrent unit (GRU). LSTM has some value $C_0$ and it passes all the way to the right to have. Maybe $C_3$ equals to $C_0$. That’s why the LSTM as well as the GRU is very good at memorizing certain values. (Peephole connection)

LSTM is more powerful and more flexible since there’s three gates instead of two. 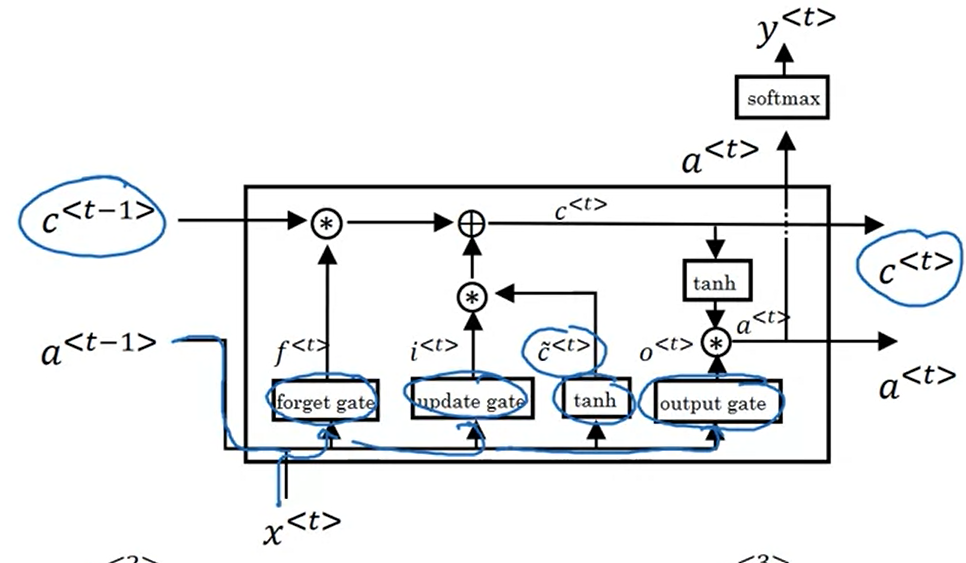 Let’s assume you are reading words in a piece of text, and plan to use an LSTM to keep track of grammatical structures, such as whether the subject is singular (“puppy”) or plural (“puppies”).

If the subject changes its state (from a singular word to a plural word), the memory of the previous state becomes outdated, so you’ll “forget” that outdated state.

Bidirectional RNN: use a cyclic graph and take into account the information from the past and from the future.

Need the entire sequence of data. 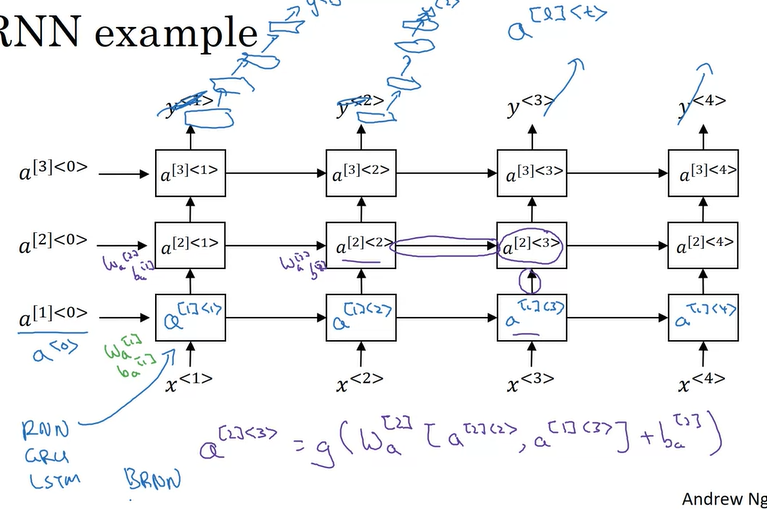 What you should remember

2.This specific type of architecture is appropriate when:

3.To which of these tasks would you apply a many-to-one RNN architecture? (Check all that apply).

Speech recognition (input an audio clip and output a transcript)

Image classification (input an image and output a label)

4.You are training this RNN language model, at the $t$th time step, what is the RNN doing? Choose the best answer.

In a language model we try to predict the next step based on the knowledge of all prior steps.

5.You have finished training a language model RNN and are using it to sample random sentences, as follows:

What are you doing at each time step t?

(i) Use the probabilities output by the RNN to pick the highest probability word for that time-step as $\hat{y}^{< t >}$. (ii) Then pass the ground-truth word from the training set to the next time-step.

(i) Use the probabilities output by the RNN to pick the highest probability word for that time-step as $\hat{y}^{< t >}$.(ii) Then pass this selected word to the next time-step.

-[x] (i) Use the probabilities output by the RNN to randomly sample a chosen word for that time-step as $\hat{y}^{< t >}$.(ii) Then pass this selected word to the next time-step.

The ground-truth word from the training set is not the input to the next time-step.

6.Alice proposes to simplify the GRU by always removing the $\Gamma_u$. I.e., setting $\Gamma_u = 1$. Betty proposes to simplify the GRU by removing the $\Gamma_r$. I. e., setting $\Gamma_r = 1$ always. Which of these models is more likely to work without vanishing gradient problems even when trained on very long input sequences?

-[] Alice’s model (removing $\Gamma_u$), because if $\Gamma_r \approx 1$ for a timestep, the gradient can propagate back through that timestep without much decay.

-[x] Betty’s model (removing $\Gamma_r$), because if $\Gamma_u \approx 0$ for a timestep, the gradient can propagate back through that timestep without much decay.